How We Do It and Why 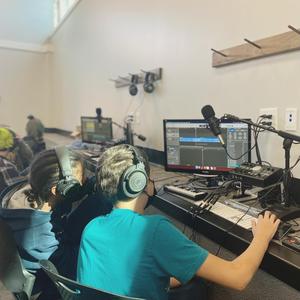 Technology has impacted music dramatically through the years, from the first stretch of goatskin over a carved djembe, to the shift from the delicate harpsichord to the powerful piano, to the meticulously designed auditorium, to the invention of radio. It marches ever on, constantly changing, as musicians master one aspect of fresh development and seek more innovations.

In the late 1970s, I was approached by a young music student who was working with new technology: a music synthesizer. I myself was a music student, working with very old technology: the human voice. The synthesizing fellow asked whether I would contribute recorded “samples” of my voice to a project he was building. His project was intriguing and unique, and I agreed to do it. While there were not yet personal computers widely available, personal-sized music synthesizers had been created and marketed by Robert Moog beginning in 1970, but I had never seen one. (A visit to the interactive Moogseum in Asheville is recommended and fun!)

I was ushered to a microphone, where I was to sing each note in my range, one at a time. While this may sound simple enough, it actually requires some sophisticated understanding of the voice to accomplish. A singer has to make complex physical adjustments in order to produce a quality of voice that is both pleasingly resonant and equalized from bottom to top, so that the sound doesn’t split into segments that seem unrelated to one another, or become tight, breathy, over-darkened, etc. The synthesizer fellow wanted an equalized and uniform sound throughout three octaves, from well below the treble staff to well above it.

Once I had completed the recording, the fellow demonstrated to me that he could now push a key, and my voice would come out on that pitch, presto! This was disconcerting, marvellous, and troubling all at once. It was a little like he’d captured my very soul in a bottle, and was now releasing it however and whenever he chose. But there was no going back, and I figured nothing would ever come of this newfangled electronic music, anyway.

This week, music teacher Court Wynter introduced our 8th graders to working with our new music tech lab, in the soaring new music room at the 7th Street building. Not only can they make use of vocal samples, but they can use samples of every instrument on earth. They can “grab and drag” snippets of pre-composed “loops” of music and rhythmic patterns, layer them together in a matter of seconds, and repeat them to create endlessly unique compositions. They can change the time signature, the key, the genre with a few clicks. This first stage of tinkering with the offerings of Garage Band is considered to be akin to using BIG Lego blocks. The process is so simple that it assures success, but it’s still full of choice and possibility, and is entertaining and engaging. In making unique creations with these building blocks, students are solving problems and will soon be analyzing the popular music they love, recognizing that the same drum and bass patterns have been looped over and over, to create that groove they like, and layered electronically over other repeated patterns. (This same technique of “ostinato” has been employed by composers for generations, using live musicians instead of precomposed, electronic ones.) Our students were fully engaged, on day one.

Beyond these first steps, there are vast learning possibilities through music tech. Each station has a midi keyboard, for input of original ideas. (This will begin with patterns they have recently been studying on keyboards with Mr. Court: chords and melody for Heart and Soul and Jingle Bells, for example.) That material can be altered and tinkered with. They can sing or play an instrument into a microphone. They can create original beats on a drum pad.

Although familiarity and comfort with tech can give students a leg up to careers in sound engineering or production, singers and instrumentalists should also remain familiar with technology. It’s helpful to have understanding and, perhaps, some control over how their sounds are produced on recordings or amplified and altered in live performance. They can explore, through sophisticated curriculum (created and tailored for us by Liz May, of SoundLizzard Productions,) that include acoustics, digital theory, signal flow and equipment, fundamentals of sound and frequency, and much more. Projects that rely on music tech such as advertising jingles, podcasts, and instructional apps lie ahead for our students.

This lab is permanently arranged around the periphery of the music room, so that Mr. Court could move from large group instruction or rehearsal to music tech, without setting up or breaking down equipment. The new room provides ample space and beautiful sound, for singing, drumming, and all manner of instruments. Now, we have also invited in the 21st Century, and we have space enough for that as well.

Thanks From the New Music Room

The various elements of each station of our new music tech lab were researched and selected for us by ABS parent Bill Stevens, an owner of Ovation Sound, sound engineer and producer, guitarist, pianist, and composer. Bill volunteered to set up and connect our studio and has helped with all aspects of function, training, and general encouragement. He is excited that our students will have this opportunity to build skills that can pave the way to a broad variety of careers in the music industry. Bill has also provided maintenance and repair of our guitars, and was the broadcaster of our live streams of Friday Sing, during distance learning. We are deeply grateful for his generosity.

The hand-made wooden headset hangers above each of our eight student tech stations were built and installed by Joe Madras, a friend of the school who donated time, expertise, and materials.

A beautiful Kawai baby grand piano was donated to the music program by another friend of the school, David Bell. Mr. Bell is also gifting the room with a theremin! (Next Halloween, we’ll have some scary sounds mastered to share.)

Stay tuned for more reports about the other half of our new 7th Street addition: the gym and Coach Bri!